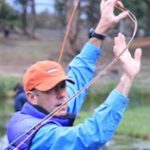 Peter Hayes
Peter is one of the most credentialed fly fishing guides and instructors in the world.

There is no one in Australia more qualified than Peter to teach you fly fishing and fly casting.

Peter has been the Australian Casting Champion a total of ten times and he has twice represented Australia at World Championships.

A twice silver medal winner at these events, on one occasion Peter cast a single handed fly rod an incredible 74 meters.

In May 2000 Peter was again selected to represent Australia at the World Fly Fishing Championships held in Bristol – England. For Peter, a career highlight was winning a bronze medal at this competition, the peak event of the sport of fly-fishing. Peter was also able to catch the largest fish of the competition, a brown trout of 61.5 cm on a dry fly from the River Test.

It is a rare skill to combine the two disciplines of competitive casting and competitive fishing and to date there are only two people on the planet that have won medals at both World Fly Fishing and World Fly Casting Championships.

In October 2007 Peter became the first Australian to be recognized by the International Federation of Fly Fishers (IFFF) as a Master Casting Instructor. This is the highest level of casting instruction certification possible. In 2012 Peter was awarded a prestigious position on the Casting Board of Governors (CBOG) of the IFFF.

For a number of years Peter has worked with the Australian Fly Fishing team as their skills coach.

Over the past decade Peter has conducted his international casting program in China, South Africa, New Zealand, Malaysia, Indonesia and the USA as well as at home in Australia.

Peter started guiding in 1994 after more than a decade working as a mechanical design engineer. He quickly developed a growing repeat clientele that have fished with him now for over 20 consecutive years.

Extensive trout fishing experiences in North America, New Zealand, the UK and mainland Australia have stood him in good stead in his homeland Tasmania.

Also no stranger to salt water fly- fishing Peter has competed successfully in the Broome Fly Rod Sailfish Tournament on two occasions. He has fished throughout Northern Australia and International destinations for all manner of species from Bonefish and Barramundi to Tuna. 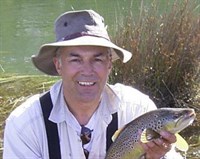 Dave ‘Bamboo’ Hemmings
I first met Dave more than 15 years ago when he came along to one of my regular casting classes.

These days David has become one of Australia’s best Federation of Fly Fishers Certified Casting Instructors. A great credit to him.

Dave was a previous disciple of Mike Spry’s and had many years fishing in the Snowy Mountains under his belt. Dave also owned his own raft which was previously one of Mike’s Swampy River rafts.

David has guided with us for the past 8 seasons and all the clients enjoy his educational talents and his light entertaining demeanour.

David has a sport-fishing boat at Miena and whilst he loves to guide anglers in Tasmania’s iconic Central Highlands David’s heart really lies in the Northern Midland meadow streams and rivers.

A few years ago David became the proud owner of a Boulder drift boat that he imported from Colorado. On a day off David loves to float gently down the Macquarie River in Northern Tasmania flicking dry flies to sight fished trout.

Another of Dave’s loves is building and casting bamboo rods. Dave recently spent a week in the United States learning rod building under the guidance of the great maker Jeff Wagner.

David has been a tutor at the ‘Hayes on Brumbys’ weekend workshops since their inception.