Peter Hayes Says Finesse Is What The Greats Have In Common

I was really struggling with a subject for this issue of FlyStream, but then, on absolute deadline, a topic dear to me came to mind. It was brought to my attention by Tim Rajeff at a talk he presented to a group of 60 flyfishers in Launceston. I will do my best to share the concept so bear with me. During the talk, Tim described me as someone with a drive for more knowledge; who had just spent an entire winter overseas continuing an education in all aspects of flyfishing so he could pass that knowledge on to other anglers. As Tim spoke my spar-row chest puffed out and I grinned. He knows I’m forever the student in all aspects of my life; and particularly anything to do with flyfishing. It’s the learning and teaching aspect of my job I enjoy most.

Spending time with the top players.

Petitjean, Klinken, Arden, Rajeff & Rajeff, Gawesworth, Johnson, Morgan, Siem, Kreh, Wulff, Richards, Vokey and Droz are just a few of the flyfish-ers I have great respect for. I’m lucky enough to have spent time with them all recently.

Or maybe it wasn’t luck – I actually sought them out and visited them or asked them to visit me. I can’t em-phasise enough the importance of surrounding yourself with people who know more than you about a topic. After 40 years of high level competi-tion casting, competition fishing, guided fishing and teaching casting you might think there wasn’t much more I personally could learn. Well, I find my- self learning the same thing time and time again from each of the great play-ers I hang out with. It’s a lesson I never get tired of learning. Let me share it. What makes greatness? 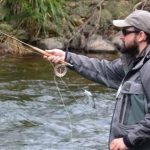 Just two days ago I sat and watched Martin Droz, many times World and European flyfishing champion, tie flies. We chatted about all aspects of flyfish-ing before we went out on the river. I could tell from our conversation he knew what he was doing. As I watched Martin fish I realised I was watching greatness. His wading on the slipperiest stream in Tasmania was smooth and effortless. His casting was easy but precise. Contact with his nymphs, influ- enced by various currents and winds, was never in doubt. I could see the simplicity and the beauty in his every movement.

A couple of months earlier I sat on the banks of the Deschutes River in Oregon and watched World Distance Spey Casting Champion Travis Johnson as he taught me to cast a two-handed rod. I knew I was watching and listening to greatness. Travis had 20,000 hours with his two-handed rod and he knew intimately what was required to make perfect casting strokes. I sensed his skill and his passion for the ultimate casting stroke minutes before he even picked up the rod. I wasn’t disappoint- ed as I watched beautiful loops soar across the river.

Hans Van Klinken sits behind his vice and talks about life, love and flyfishing and before you know it, he hands you one of the most remarkably beautiful, functional and deadly emergers you can ever use. He conjures it up almost magically in front of your eyes. He has probably tied tens of thousands of them. Perfectly, every time. Not one turn too many or too few of silk, hackle or fur. Hans is so smooth to watch as he ties a fly, you don’t realise he has! I was a guest of Simon Gawesworth’s family recently at their home in Washington State. We drank too much gin and cast a lot. One of the take-home messages I have from Simon in respect of two-handed casting, is to be smoother than smooth. I just can’t emphasise enough how important this concept is in all types of casting – not just two-handed rod casting. One of Australia’s great two-handed casters, Tony Loader, spends hour after hour after hour on a tiny aspect of the ‘circle up’ movement. Tony knows how impor- tant it is and he works on it. I’ll bet less than 1% of readers have any idea of what he is on about!

A few weeks ago, I ran the Australian Speyclave here in Tasmania. It was sponsored by RIO and we had international tutors like April Vokey on hand. Part way through the teaching program on the first day, I made the point that, whilst it was clear to me people were trying their best to learn the casting stroke, I felt not enough ‘care’ was being applied. You can’t learn very well if you are just ripping and whipping the line about. The movements need- ed to start more slowly (there’s a big difference in casting between ‘slowing down’ and ‘start more slowly’) and with much greater care.

I cast in Montana recently with Bruce Richards. Bruce has designed fly lines for Scientific Anglers for 33 years and I don’t think there is much about fly casting Bruce does not understand. When I watched Bruce cast, it was as if he imagined the whole world was watching. The level of care with each stroke was obviously high. The economy of movement and ease was clear and once again I knew I was watching a perfectionist.

Finesse, finesse and more finesse – it’s what the greats have in spades.