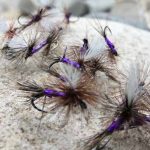 If your flyfishing experience is limit- ed, you might be easily fooled into believing you MUST have this or that particular pattern. You’ll end up with boxes full of all sorts of flies, often several of the same pat- tern and in several sizes too. Then you’ll listen to the experts – on the water, on the internet or at the fishing club meeting. They will reel off names of killer patterns and it won’t be long before you feel under-gunned if you don’t have boxes full of them too. Then there are the guides, fly tiers and fishing writers. You will need sever- al more boxes to for their ‘must-haves’!

Where am I going with all this? Well, the fashion of flies is something that interests me greatly. I recently looked through Malcolm Crosse and Rick Keam’s fantastic new book ‘Australia’s Best Trout Flies Revisited’. This book comes some 20-odd years after the original was published. I think you should go and buy them both – you will thank me for that advice one day.

Anyway, same country, same fish – the only difference is 20 years. How is it that the flies are so vastly different? When you read the second edition, you could be forgiven for wondering how we ever caught any fish with the old-fashioned flies from 20 years ago!

Imitation or presentation is a conversation that every flyfisher gets involved in sooner or later. I’m normally not a fly pattern type of guy. Instead, I’m a self-confessed presentation fanatic. For me, the fact is, it’s a rare occurrence when I feel a specific pattern is a game changer. Maybe, say 3-5 times a season (and I’m out there guiding 120 days a season) I see an instance where the choice of fly really does make the difference.

However for the most part, I’m a big believer in throwing a fly that is functional and about the right size and shape that fish will want to eat. Keep in mind I’m talking dry flies and perhaps 70% lake fishing here.

Having said all that, just last week I guided a couple of my favourite clients. Tucker and Katie are in their mid-80s and for nearly 20 years now, they’ve travelled all the way from Pittsburgh in the USA to fish with me.

Tucker and Katie are the sort of people you would want as grandparents. Both are very experienced and they’ve flyfished all over the world. Tucker has always tied his own flies and I know better than to offer him one of mine. He would always use his international flavoured, hand-tied masterpieces in favour of my local flies. On the other hand, Katie loves the fact that I have tied her my latest and greatest pat- terns, which are irresistible to Tasmanian trout.

Never before have I seen greater contrast in the type of flies shown to the trout in the Tasmanian lakes, than during their week this past January. Keep in mind we are only throwing dry flies to the fish. Now get this: over the past two decades guiding these two, some days my flies have shone and some days Tucker’s clearly win out.

Other days there seems to be no ad- vantage for either group; it’s just plain tough work. To put it another way, there seems to be no clear distinction between the flies the once-a-year blow- in selects, versus those the local professional ‘guru’/ flyfishing guide chooses.

But this year it was different. On the first morning Tucker held up a purple dry fly and said with a twinkle in his eye, “What do you think about this beauty Peter? Do you know what it is?” He was surprised to hear me say that it was a Purple Haze and that I thought the browns here would love it just as much as the cutthroats love it in Mon- tana. (It was just lucky that I’ve fished lots in Montana and used the Purple Haze extensively.)

The short story is that the Tasmanian trout ate it all week, clearly in favour of anything I tied on. Since then, I’ve tied dozens of Purple ‘Hayes’ in two differ- ent sizes and believe it or not, every fish my clients have caught this past two weeks, has been caught on this pattern. Of course, it helps that this is the only fly I’ve needed to tie on!

Before you know it, this guide, fishing writer and fly tier will have created a new fashion with the must-have Purple Hayes! 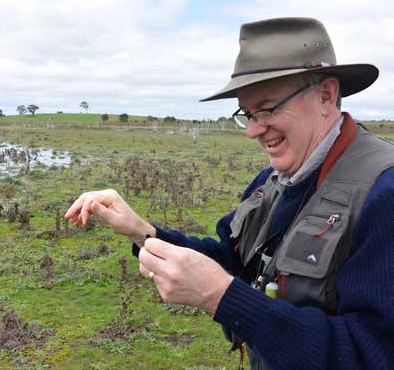 I’ve been there and done that before. Twenty-three years ago, I started my Tasmanian guiding business. The Red Tag was clearly the most used and popular fly in Tasmania at that time. I suspect this was at least partly because that great fly tier, tackle shop owner and guide, Noel Jetson, virtually only used – and recommended – Red Tags. Before long it was the first fly tied on to every angler’s line and guess what? All the fish were being caught on a Red Tag and it became a killer pattern in Tasmania.

Anyway, I created a Guides Tag using a fluoro pink tag instead of the boring old red that everyone else used. I used a shiny green tinsel body that didn’t get waterlogged like the standard pea- cock herl. Nor did it unravel after a sharp-toothed bite. Then I wound a short black palmered hackle, like Malcolm Gillies used on his revolutionary Great Lake Beetle back in the 1950s. This gave the body fatness as well as floatability. I finished it all off with a large furnace front hackle just like any old Red Tag.

At the time it was the most functional fly I had and it worked well, catching many trout. It was all that I ever tied on and other anglers soon got onto it. Be- fore long, the Guides Tag was copied and mass manufactured in Kenya and the Philippines, then sold in most good fly shops.

The truth is that I haven’t used one for maybe 18 years. I ran out of them and found something else to hang my hat on. If I really believed the Guides Tag was so deadly, you would think I’d still be using them. It was a fashion. The Purple Hayes will likely only last a year or two as well.

Then Came the English Competition Guys

Before we knew it, champion English competition anglers John Horsey and Martin Cottis were running clinics in Australia for our anglers. I was one of many that attended, and it opened my eyes to the fact that trout could be caught on flies from the UK comp. scene just as well – if not better – than with our local flies. Sure enough, a whole host of flies like Bibio Hoppers, Bob’s Bits and Carrots became the new fashion.

The bottom line? Don’t get sucked in (excuse the pun) by every must-have, killer pattern recommended by experts. Instead, use a really functional fly, pres- ent it well and with confidence. The results will speak for themselves. If the fish refuse you, then use a smaller one on a lighter tippet. 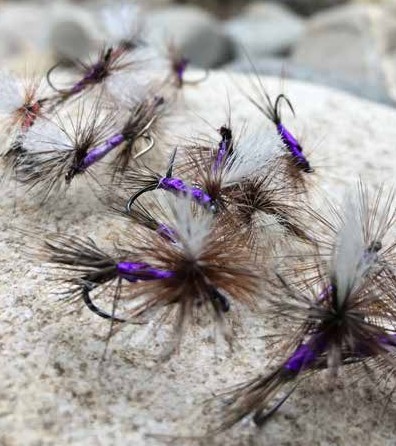 By the way, the dressing for the deadly, must-have Purple Hayes is:

HOOK: Size that suits but make sure it is barbless.

TAIL: Deer hair for buoyancy to support the weight of the bend.

HACKLE: A few turns of grizzly hackle and a few of furnace (just like an Adams).